Donald Trump was in Macon, Georgia this past Sunday, November 4, 2018 campaigning for the governor-elect, Brian Kemp (R-GA). This rally was the solution to foil Obama’s Friday appearance at Morehouse College for the DNC governor-elect, Stacey Abrams. Stacey Abram’s rally took place at the Forbes Arena that can house up to 6000 people. Forbes is impressive as an arena, but at the Middle Georgia Regional Airport, in Macon, GA, a 10,000 person crowd stood inside the Trump rally hangar, while 6000 waited patiently outside. Although the Macon-Bibb Police Captain Brad Wolfe estimated there were almost 12,500 people inside the hangar for the Trump rally.

The traffic into Macon was a hassle, especially at the Airport. The weather was rally perfect, spurring on voters for this midterm election. The temperatures were moderately warm with the same moderate humidity level for the first week of November in Macon, Georgia. The skies shifted from sun to foreboding clouds. However, not a drop of rain touched the attendees attending either rally. 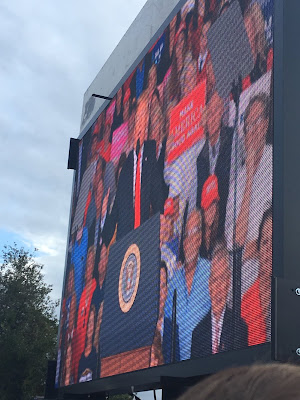 Upon arrival at the airport for the Trump goers, the line to get in was long. Forget going to the airport because you would get redirected to a shuttle location and that line was equally as long to ride one of the shuttles. The waiting did offer a rare chance to bond with fellow Trumplicans and conservatives alike. One of the side benefits at Trump rallies.

Waiting For the President

You hear different conversations regarding policies, support for America, and continued mockery of left-wing media and the Liberals, mixed in with raucous laughter. If there was a moniker so profoundly mismanaged, poorly noted and foolishly used by the mainstream media; it would be the notion that right-leaning people are “racists” or “Nazis.”

In attendance, as usual, were a considerable number of Black Americans and Latinos that peppered themselves in line all having the same goal in mind, supporting their President and encouraging the people to stand for what Americanism is all about. Southern folks speaking with the kindest of disposition accentuated only by a warm Southern drawl. They all know about the media’s methods of deception, and they are all on the same page with the culture of the Left’s unhinged insanity. If these conservative white folks were really racists, they would not allow the black and Latino attendees. If you were to stand there as a “minority,” it would probably be the safest place in America that you could stand. One lady said, “we’re all the same people here.” True words from a white lady spoken to an Asian millennial male. The comedy was truly epic as the spin from the likes of Don Lemon and such are completely and totally false. There was not a safer place a Latino could stand than in that crowd of white conservatives and right-wing people. If these people are racist Nazis, then they are doing a horrible job of being racist Nazis.

The Magic Inside The Hangar 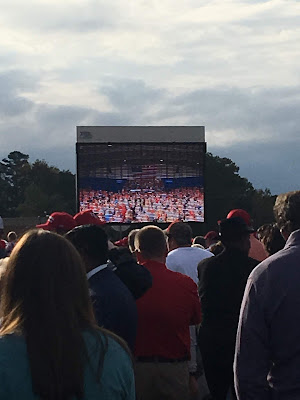 The hangar at Middle Georgia Regional housed about 10-12.5 thousand people and all of them were ramped up with an energy that was infectious. The people were hyped up, and the vibe was palpable. Expectations to see a man that revolutionized the American way of life, in terms of policies, taxes, and national safety was all anyone could talk about. Girls riding shuttles smiled in excitement about seeing Air Force One land and then pouted when they realized they were too late to stand on the inside of the hangar. Some people had waited since the parking lot opened at dawn camping outside the hangar while others did not plan as appropriately as they should have.

Brian Kemp spoke before the President, ensuring would be voters precisely where he stood on important policies regarding gun rights and tax cuts. The actual event didn’t start till 4:00 pm. Kemp stirred the crowds up just in time as 4:00 pm rolled around.

As Air Force One landed, people’s excitement levels kicked up another notch as the President and First Lady deplaned and then entered the hangar. Trump did his signature wave to the crowds that circled him and began his uplifting speech as the hangar doors slowly closed.

Outside the hangar, the remaining Trumpers stood watching a jumbotron live screen huddled around speakers to listen to their President talk about rights, immigration and voicing support for Brian Kemp. Trump also would not be Trump if he did not jab at the #FakeNewsMedia. What one would expect from President Trump is exactly what he brought on Sunday; fun, jokes, energy, class, statesmanlike behavior, not-so-statesmanlike humor, and urgency regarding the future of the country. 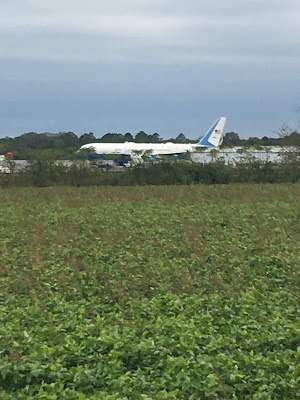 It would not be a Trump rally without a protest or two between the hangar and the Jumbotron locations. Outside at the Jumbotrons, there were some technical difficulties with volume not projecting right. As people were listening carefully, you could hear faint chants of “Black Lives Matter! Black Lives Matter!” People turned and what they thought to be a protest, were actually only three individuals that stood in the middle of the crowd and started their chants. One of them appeared to be a transgender man, or a transgender woman transitioning, or it could have been a feminist.  Within a span of two minutes, the three protesters got escorted off the premises as people exuberantly chanted, “USA!” at the same time laughing at the nature of such a pathetic effort. It ended with everyone singing, “Na na na na, na na na na, hey hey hey, goodbye!” A fun time for all, as laughter ensued and the mockery of such folks continued as the speech went on. What the media terms a protest, was just a few unhinged Leftist crazies acting out in their usual attempts to disrupt a once peaceful situation, prior to their arrival.

As the event came to an end, floods of people began making their way to the shuttle lines. While folks started filing out from the hangar, the President and First Lady boarded Air Force One, headed for another rally in Tennessee. For all the demonizing that occurs in the media sphere, one thing is certain, CNN, MSNBC, Vox, ABC, NBC, and other left-leaning media have it all wrong. They are utterly and completely incorrect in their assessment of Trump lovers. The mainstream media is entirely in alignment in their propaganda against Trump. There is not a friendlier, more lively, energetic crowd of people who love their lives, their families, their country and their President. A great deal of joy and fun hovers in the air after a Trump rally just like his energy; it is tangible, you could cut it with a knife! People love being there at these rallies and love being with each other as they all stand for their values expressed by our elected leader.

Conservatives are fun-loving, nationalistic and vibrant Americans. We are all Americans, that is what nationalism means to the Conservatives. Love for one’s country and putting it first- that is what Trump supporters believe. The media has Republicans and conservatives all wrong. The future looks bright, and the garbage that folks like Don Lemon of CNN or Carlos Maza of Vox try to sell viewers is not just misinformation, it’s disinformation, and they have just become the enemy of these folks who simply love their lives, their significant others, their values, their country, and their president.

Latest posts by John Lee (see all)
Share to break through the censorship!