Two years ago, on May 31, 2017, a little past midnight President Donald Trump tweeted out, “…despite the constant negative press covfefe.” The president may have been a bit tired and obviously meant to type “coverage.” Who can blame him for being tired after the long campaign run? He pushed relentlessly, flying to multiple states in one day while Hillary Clinton barely got out of bed.

President Trump coined a new word, went to sleep and then woke up to a social media frenzy. Trump’s superstar word Covfefe went viral and ranks as one of the most famous Trumpisms of all time. From the oval office, the press asked Trump how he would pronounce the word and he explained how he would. He even sent out another tweet saying, “who can figure out the true meaning of covfefe. Enjoy!” While the press fixated on trying to figure out Trump, a patriot entrepreneur had a brew going on of his own and created the Covfefe: Making Coffee Great! brand.

The brand’s mission is to unite Conservatives because “We have to win. If Covfefe does well, so does America,” says Covfefe Coffee’s creator. “Conservatives are now the new counter-culture.” Soon after launching on Amazon, Covfefe became a major success., selling thousands of pounds of Covfefe, receiving 5-star reviews, and the 2018 #1 New Release in the coffee category.

Buying Direct is the Way to Go Anyway

Shortly after rising to to top of the world’s largest online retailer, Amazon suspended Covfefe Coffee from advertising. Why? With the vague policies and bureaucracy, the platform is entirely operated by AI, cheap foreign labor, and administrative dialogues. So, out of spite and with Amazon political bias masked in hate speech, they pulled the plug. The formal reason given for why Covfefe was suspended by the American company Amazon was for displaying the American flag. Excuse me?! Yes, you read that clearly. Amazon is an American company that has been blessed with the opportunity to earn billions because of the freedoms that the same country has offered. However, they will not allow other brand owners to freely fly the American flag on their advertising?

In addition to digitally burning down the American flag, Amazon stated that by using the phrases “No Nonsense” and “No BS” on Covfefe listings, they were in violation of Amazon’s profanity and vulgarity policies. Labeling “No BS” and “No Nonsense” as being vulgar is over the top and a far cry from being reasonable or making any sense. It is safe to say that the snowflakes have officially melted. In addition, having a top-selling MAGA coffee with a name that the president coined, they felt infringed upon in their “safe spaces.”

Conservatives must awake to their buying power. Remember most of us are the hard working taxpayers propping up this country with its support and energy, while Leftists promote socialism and handouts. We are the American Dream. Covfefe Coffee is the American Dream is in purest form. A man living in the “land of the free” started a coffee company and flew the American flag. One day after alt-media reports came to light, Covfefe was personally contacted by the only American Amazon agent they had ever talked to and they begged them to continue to use their platform. The creator of Covfefe: Making Coffee Great! told them “to go pound sand.” Covfefe Coffee is sticking to their buying direct model and that means it’s time to head over to www.doyoucovfefe.com and grab 2 bags of the best MAGA coffee on the market. 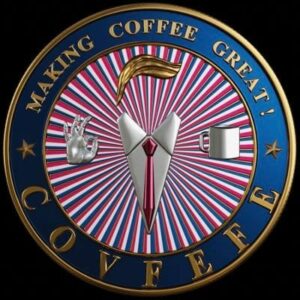 Covfefe: Making Coffee Great!
At COVFEFE, we provide proud Americans access to world-class coffee without having to find your political and cultural opponents. We stand by our quality, taste and customer support, however we are more than just coffee just like how you are more than just a coffee drinker. COVFEFE isn’t just the world’s greatest coffee. It’s also a lifestyle. Coffee For Deplorables By Deplorables.

Latest posts by Covfefe: Making Coffee Great! (see all)
Share to break through the censorship!