Speaker Pelosi Refuses to Send Impeachment Articles to the Senate

The 3 Essential Parts of the Impeachment Clause

The three parts of the Impeachment Clause include the following: who can be impeached, for what, and how does Congress remove such person from office. It’s not subject to dispute that the President of the United States is subject to impeachment – it’s expressly stated in the Constitution. This, however, is the only part of the Trump #ImpeachmentHoax that both Parties can agree upon. The second part addresses what a public official can be impeached for and whether the two Articles passed by the House adequately articulate a legal basis for impeachment.

Democrats ran the gamut with theories upon which Trump should be impeached; first it was quid pro quo. Then, Democrats (perhaps) read the Constitution and realized that quid pro quo isn’t a legal basis to impeach, so they moved onto using the terms “bribery” and “extortion.” Spoiler alert: the Democrats’ own witnesses testified there was no evidence of bribery or extortion, and both theories died abruptly.

To recap, President Trump was never accused of committing treason. Democrats came out of the gate with quid pro quo until realizing it’s a commonplace legal term that merely means “something for something.” That’s why Democrats moved onto bribery.

18 U.S.C. § 201(b) defines bribery as: “directly or indirectly,” corruptly giving, offering, or promising “anything of value to any public official” with the intent to “influence any official act” or “influence a public official to commit fraud…or to do or omit any act in violation of a lawful duty.”

“There was no blackmail….They blocked this money and nobody asked us [for] anything.” Ukranian President Volodmyr Zelensky said, as reported by CBSN,  Zelensky’s testimony, coupled with the Democratic “star witnesses” who couldn’t offer a scintilla of evidence supporting a bribery charge, prompted House Democrats to accuse President Trump of “Abuse of Power” and “Obstruction of Congress”; both of which are purported to fall under the third category of impeachable offenses, “high crimes and misdemeanors.”

Admittedly, “high crimes and misdemeanors” is a term of art used to encompass both criminal and non-criminal conduct. In 1828, “misdemeanor” meant “ill behavior; evil conduct; fault; mismanagement.” While there is no hard and fast definition for the intentionally vague ground for impeachment, let’s assume Abuse of Power and Obstruction of Congress are constitutionally viable bases for the sake of argument.

This leads to the final step in the impeachment process: conviction. Again, the Impeachment Clause states “The President…of the United States, shall be removed from Office on Impeachment for, and Conviction of [High Crimes and misdemeanors].” Conviction is Nancy Pelosi and Jerry Nadler’s worst enemy right now. Why? Because not only do House Democrats have virtually zero evidence, but because Republicans hold the majority of Senate seats, 53-47, with two independents.

Republican Control of the Senate

Republican control in the Senate is critical, but for a reason other than what you might think. Under Article I, Section 5, Cl. 2, “Each House may determine the Rules of its proceedings.” This means that, assuming Senate Republicans vote along Party lines, the GOP will be able to determine the parameters and rules for the trial.

Established rules governing impeachment trials do exist; they have not been revised since 1986 and the Senate may modify these rules by a simple majority. Likewise, Chief Justice John Roberts will preside over the trial, but his role is much different than that of a judge presiding over a trial in state or federal court.

Key Points Regarding the Trial With Chief Justice John Roberts

Can Speaker Pelosi Refuse to Send the Articles of Impeachment to the Senate? Maybe

As of December 23, 2019, Speaker Pelosi has yet to send the Articles of Impeachment over to the Senate. Speaker Pelosi has grounded her defense in refusing to send the Articles to the Senate based on a textualist interpretation of Article I, Section 3, Cl. 6, which states, “The Senate shall have the sole power to try all Impeachments” – not the Senate shall try all Impeachments. Under this semantic, Pelosi is arguing that if there is a trial, it will be in the Senate; however, the Constitution does not require a trial.

On the other hand, every other time Articles of Impeachment have passed, the Articles were promptly turned over to the Senate for trial, which establishes precedent. According to Stephanie Grisham, “It looks like the House Democrats have thrown our country into chaos for absolutely no reason,” said the White House Press Secretary Stephanie Grisham.

Pelosi further capitalized on Senate Majority Leader Mitch McConnell’s (R-KY) December 17, 2019 statement. Talking to reporters, McConnell said, “This is a political process.There is not anything judicial about it. Impeachment is a political decision…I’m not impartial about this at all.”

Remember, Senators act as jurors during the impeachment trial and jurors are supposed to be impartial. But, it doesn’t take an affirmative statement to realize no one is impartial during this sham and acting “shocked” that McConnell will not be impartial is nothing more than an attempt to gaslight the uneducated liberal base.

Grisham’s comment raises an interesting follow-up question. Why vote on Articles of Impeachment that are guaranteed to pass in the House along partisan lines only to withhold the Articles from the Senate thereafter? The reason is simple: legacy.

The entire world knows these impeachment proceedings are anything but impartial and nothing more than a political smear campaign. Simply put, Democrats know their nominees are self-imploding and the liberal left’s shot at 2020 is dwindling at a pace faster than ever.

Democrats lost in 2016, bad. President Trump shook up Washington and cut off all the well-established favors traded amongst career politicians, many of which are linked to Bill and Hillary Clinton. Democrats want retribution, but just can’t find any evidence to remove Trump from office. So, the Democrats decided to attack Trump’s legacy and reputation. 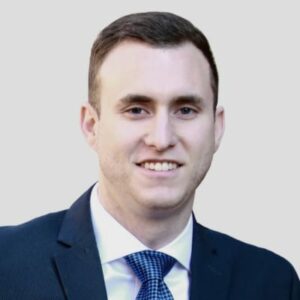 Michael Yoder
Mike Yoder is a contributing author for NRN. He is a practicing attorney who lives and works in Washington, DC. Yoder has litigated multiple high profile cases, including: In re: 3M Dual-ended Combat Arms™ Earplugs Product Liability Litigation on behalf of hundreds of disabled veterans, as well as In re: Capital One Consumer Data Breach Security Litigation on behalf of 106 million people whose data was compromised during the massive 2019 breach. Outside of complex civil litigation, Mike Yoder has also represented numerous whistleblowers in the fight against insurance, corporate, and government corruption. Prior to practicing in Washington, DC, Yoder studied the mafia's criminal enterprise in Florence, Italy, and international patent and copyright infringement prosecution in the EU. In 2017, he traveled to The Hague, Netherlands, to attend portions of former Côte d'Ivorian President Laurent Gbagbo's trial after he was charged with war crimes and crimes against humanity. Yoder practices throughout the United States and has represented clients from 47 of 50 states, multiple clients from foreign nations, and has litigated cases in Alabama, Alaska, California, the District of Columbia, Florida, Mississippi, Maryland, Nevada, New York, Virginia, and West Virginia state and/or federal courts. Follow Mike Yoder on Twitter @MiketheLawyerDC

Latest posts by Michael Yoder (see all)
Share to break through the censorship!