The sudden lurch forward and a long mournful moan of iron on iron offered the only shocking alert to dozens of Hondurans, Venezuelans, and Guatemalans along the nearly half-mile long freight train that the final leg of their journey to the Texas border had finally begun.

There’s no conductor here. So those caught by surprise down on the tracks, chit chatting and charging cell phones by portable battery, suddenly bolted into a panicky trot.

Two Nicaraguan men hurled their belongings high over the iron-ribbed sides of a moving rail car wagon, grabbed at ladders and climbed up while others already aboard sat on its upper rim smiling at the scene below.

Inside that particular car on the second to last day of 2022, among two dozen Texas-bound immigrants, were two willful young Venezuelan men named Eduardo and Anthony, who’d earlier explained that nothing – no law, rule, border or their own empty pockets – would keep them from making some money in America.

They’ve come from all over central and South America and found their way to a train depot outside of Monterrey, Mexico – the third largest city in the country – nearly 700 miles from El Paso, Texas.

By word of mouth and social media, they knew this train would first take them – for free, no Mexican visas or permits required – 200 miles west to Torreon city, where they’d switch to another train that would take them 500 more miles north to Juarez across from El Paso.

‘We’re going to do it illegally,’ explained 27-year-old Eduardo about their intentions to sneak into America at El Paso, where the pair heard from friends that all border defenses had crumbled. ‘We’re going to avoid the authorities. We’re going to run.’

And so they did, sharing with this author video of their train journey and safe arrival in Juarez, as President Biden was preparing his first border visit to El Paso.

Eduardo and Anthony were all smiles and thumbs up in their selfie videos that they sent digitally back down trail to thousands of other aspiring border crossers. 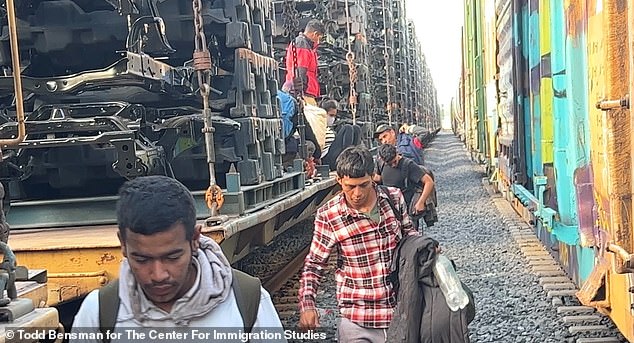 Those caught by surprise down on the tracks, chit chatting and charging cell phones by portable battery, suddenly bolted into a panicky trot.

The Beast Is Back But No One Seems To Care

Border Patrol has logged 4.5 million border apprehensions and another estimated 1.5 million undetected ‘gotaways’ since Biden’s January 2021 inauguration and lenient policies sparked all this off.

Some significant but unknown percentage of this huge traffic is carried aboard unpoliced, easily accessible Mexican freight trains lined up in a vast depot and switching yard 30 miles north of Monterrey.

It is here, amid a sprawling industrial suburbia of manufacturing plants and not far from a Hershey’s Chocolate plant, that some portion of hundreds of thousands of migrants stop on their way to America.

‘The Beast’ or ‘Death Train’ earned its morbid moniker from the grotesque accidents that occur when migrants, riding unsecured on wagon rooftops, fall victim to steel wheels or ruthless criminals.

International human rights activists and U.S. administrations demanded a decade ago that Mexico police its cargo trains and cut the human flow reaching the border.

And Mexico complied during the Obama administration in 2014. But now, the Beast is back.

An Enticing Option for Untold Thousands

Eduardo and Anthony (above center in green jacket) were all smiles and thumbs up in their selfie videos that they sent digitally back down trail to thousands of other aspiring border crossers.

‘The Beast’ or ‘Death Train’ earned its morbid moniker from the grotesque accidents that occur when migrants, riding unsecured on wagon rooftops, fall victim to steel wheels or ruthless criminals.

No one really knows how many participants in the Biden border crisis are arriving at the border by freight train. But Mexican media reporting, interviews with immigrants, people who work with them, and railway workers indicates La Bestia has been really roaring at full-throat the last couple of years. 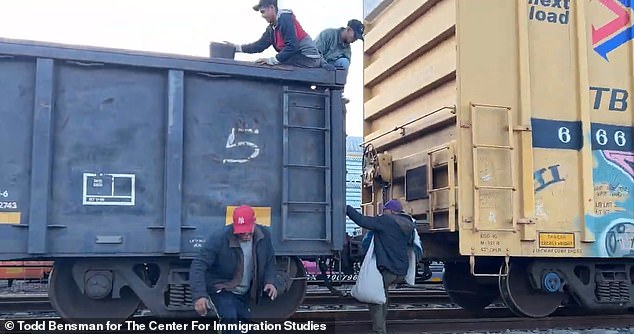 ‘They use it all the time. That’s why it’s so busy,’ said Jose Jaime Salina Flores, the director of Monterrey’s main shelter, the Casa INDI complex.

In reality, La Bestia is a two-headed monster of train networks that move migrants up from the southern Mexican state of Chiapas, along Mexico’s east side toward Texas crossings or along the country’s west side toward California and Arizona crossings, according to Mexican media reporting.

From the rail depot north of Monterrey, immigrants can catch trains to Mexican cities across from El Paso, Eagle Pass, Laredo, and Brownsville.

Flores said Mexican cartels control all access to the trains and that if immigrants don’t pay up, ‘You’ll have to work for them and it’s not going to be selling oranges.’

That may well happen but none of the immigrants interviewed for this story said they had to pay anyone anything.

At a full-to-capacity local immigrant shelter in Piedras Negras across from Eagle Pass, some two dozen immigrants waited outside for space to open up.

All but one of them said they had just arrived on La Bestia to cross the river, including a mother clutching her infant who indicated that both rode La Bestia there. They were typical of the great American mass migration crisis.

All were extremely poor Central Americans from Honduras, Guatemala, and El Salvador who could ill afford to sustain themselves for the days and weeks necessary to obtain the temporary ‘multi-use’ visas that Mexico requires for foreigners to be in-country and buy bus tickets.

Immigrants like Eduardo, Anthony, Adam, and three Guatemalans seen eating discarded food from a trash can move nearly anywhere in Mexico and hit any part of the American border they want.

The U.S. Border Patrol had just expelled all three Guatemalans under the Title 42 pandemic-era health measure. Department of Homeland Security baggage tags were still on their packs. 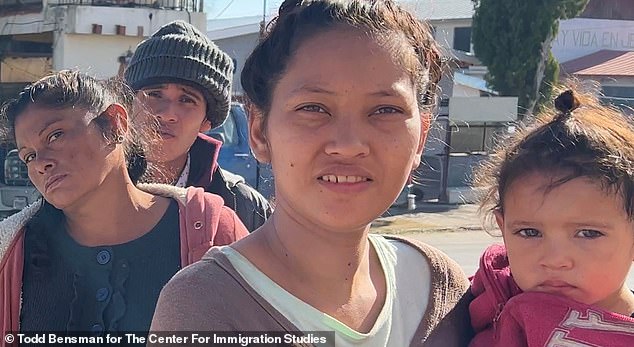 All but one of them said they had just arrived on La Bestia to cross the river, including a mother clutching her infant (above, right) who indicated that both rode La Bestia there. They were typical of the great American mass migration crisis. 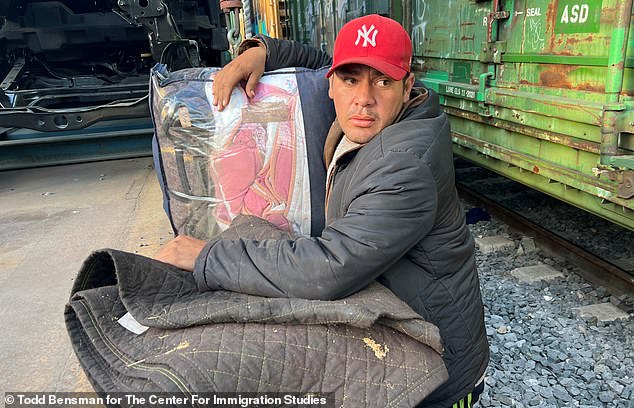 (Above) Migrant pack blankets for journey as temperatures plunge

Chewing on protein bars provided by this author, the three said they were giving up on this crossing area and planned to catch the next freight train back to Monterrey, where two of them said they’d consider catching another train over to El Paso, where everyone who tried seemed to be getting admitted into America.

Three Hondurans just expelled under Title 42 after crossing to Brownsville into Matamoros, and were driven by Mexican immigration back to Monterrey, said they were looking for the train to Juarez where the Americans were admitting everyone they knew who crossed illegally.

‘We heard all about the train when we were in Matamoros from the other people. We don’t care about walking all day long to get there,’ said Carlos, a 20-something Honduran wearing a black tee shirt bearing a United Nations logo.

They would have no problem finding the rail yard. Everyone knows where it is and proved happy to point the way.

On one recent day in the rail yards north of Monterrey, an unarmed private security guard in a white uniform and carrying a hand-held radio sat on an all-terrain vehicle as a line of immigrants (and this writer) filed past him.

The guard only looked up from his phone long enough to respond to a question from someone, to which the guard answered that the train they wanted was two tracks over.

‘Gracias,’ the backpack-toting immigrant replied and the group veered to their right and clamored over other parked trains to get to the correct one.

Later, another of the immigrants, Guatemalan Adam Garcia, explained in English that he was planning to catch the next day’s 7 a.m. freight to Piedras Negras across from Eagle Pass, Texas, a 250-mile ride he’d done before. How did he know about train departure times?

‘I heard that from the guy working over there,’ said Garcia pointing back toward a depot office building a mile or so away.

Even non-security railroad workers seem to regard the ubiquitous immigrant presence as a normal part of the landscape.

One train engineer slowly drove his massive locomotive up to an electrical box and parked. He jumped out to make mysterious adjustments at the box just as five Hondurans filed past him along the train. He and they ignored one another entirely. 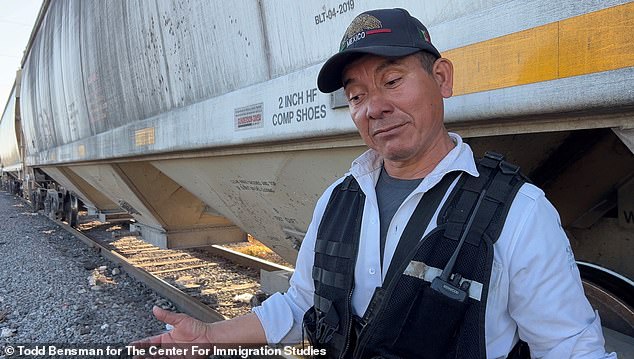 At another rail terminus in Piedras Negras, far north of Monterrey and on Mexican side of the Rio Grande, across from Eagle Pass, Texas, a private security guard who gave his name as Ricardo said Mexican police will prevent stowaways from riding the trains across the border.

Asked what his instructions were when he saw immigrants walking through a busy commercial rail yard, the engineer said calling the police wasn’t a thing.

‘Just do your job. That’s what we’re told to do, just do your job,’ the railway worker said. ‘All I can tell them maybe is, ‘don’t vandalize anything.’

At another rail terminus in Piedras Negras, far north of Monterrey and on Mexican side of the Rio Grande, across from Eagle Pass, Texas, a private security guard who gave his name as Ricardo said Mexican police will prevent stowaways from riding the trains across the border.

It’s here that they get off and walk. Ricardo says they don’t do much to stop from crossing the international border. ‘If it’s just a handful, we just get them off the rails,’ Ricardo said. ‘If it’s a sizeable group, we’re supposed to call Mexican immigration. But it’s up to them if they show up or not.’

All of this stands in stark contrast to a now-comparatively small border surge of some 70,000 unaccompanied minors during the Obama administration in 2014.

At that time, it was regarded as a major border crisis that the Democratic administration quickly ended with air deportations and demands on Mexico to shutter the traffic on its side.

‘Facing pressure from the United States to disrupt the flow of Central American migrants, Mexico has implemented new security and surveillance measures with U.S. assistance’ the pro-illegal immigration Migration Policy Institute wrote in a 2014 report.

The sudden lurch forward and a long mournful moan of iron on iron offered the only shocking alert to dozens of Hondurans, Venezuelans, and Guatemalans along the nearly half-mile long freight train that the final leg of their journey to the Texas border had finally begun.

‘Migrant testimony reports an increased presence of immigration officials in pickup trucks patrolling the roads and bus stations en route to the train line. Raids on hotels and restaurants where migrants shelter in transit cities have occurred. And immigration agents, in raids supported by federal police and the military, are targeting the trains, removing migrants from the train cars and detaining them.’

And then, illegal migrants were deported. That was another era.

Mexico is feeling no pressure to block this stream of human cargo.

There was no public mention of La Bestia before, during, or after President Biden’s talks with Mexican President Andrés Manuel López Obrador during his recent visit to Mexico City.

It remains to be seen how Biden’s new border policy will influence the untold millions of people willing to risk their lives to get to America.

But one thing is certain – there is an enormous population of migrants, who will always choose the illegal route. And for them, La Beastia is calling – until it’s shut down for good.