After 50 years in American politics, you finally will visit the U.S.-Mexico border on Sunday. Please consider these facts during your first such trip ever:

Your destination — El Paso, Texas — confirms how chaotic this crisis has become. Illegal aliens have breached America’s southern frontier, traversed that city’s sewers and then erupted onto the streets via manhole covers. Groups as large as 30, equal to an Army patrol, thus invade this nation.

Even Americans like you, who crave open borders, should agree that a policy of open manhole covers takes things too far.

Nearby, illegal aliens have turned El Paso’s airport into a giant crash pad, where they sleep on the passenger-terminal floor. Elsewhere, illegals use local sidewalks as open-air dormitories.

Nevertheless, on Dec. 19, White House press secretary Karine Jean Pierre repeated your administration’s Big Lie: “It would be wrong to think that the border is open. It is not open. And I just want to be very, very clear about that.”

Your administration’s own statistics contradict this Big Lie:

The regime media have kept citizens remarkably uninformed, misinformed and disinformed about how many illegal aliens are invading the USA. According to a Dec. 20 Harvard-Harris survey of 1,851 adults, 75% believe there are fewer than 1 million annual illegal border crossings. Only 6% responded correctly: 2.75 million in Fiscal Year 2022.

Your journalistic allies are snoring loyally through the biggest assault on U.S. sovereignty since the War of 1812.

Meanwhile, you have shifted federal air marshals from the friendly skies down to sea level, where they are processing illegal aliens at the border, to speed their entry into America. These brave, specialized law-enforcement officers are not trained to fill out paperwork in dusty desert tents. 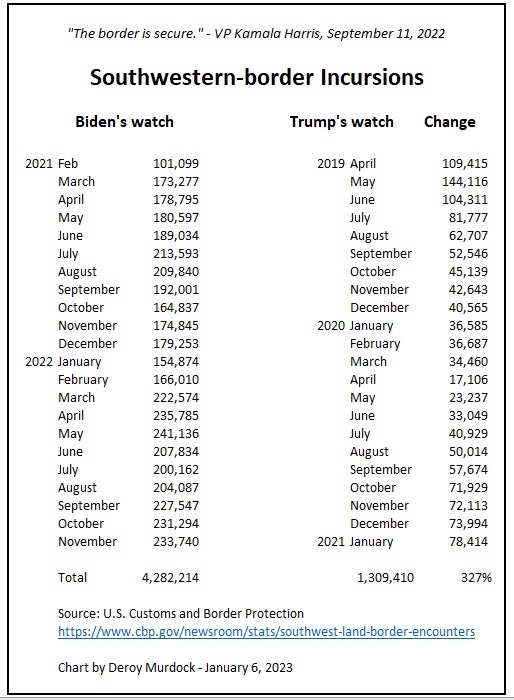 They are supposed to be 35,000 feet overhead, deterring or foiling the next Sept. 11-style terrorist attack. This is as reckless a misallocation of resources as sending cardiac surgeons into grade schools to hand Band-Aids to kids with scraped knees.

Even worse, according to Sonja Lobasco of the Air Marshal National Council, air marshals protect only 1% of U.S. passenger flights. So, if my calculations are correct, 99% of domestic flights are as vulnerable to attack as they were when al-Qaeda agents used their pilot training to turn jets into missiles.

Even worse, Lobasco said in Nov. 28’s New York Post, “There have been numerous incidents — a level 4 threat which means someone tried to breach a cockpit two days ago on a Southwest flight.”

Even worse, 98 people on the terrorist watch list were nabbed at the border in fiscal year 2022 and 15 in fiscal year 2021 (versus 11 under Trump). How many slipped through, unseen? How many are here to murder Americans, perhaps via hijacking? Who knows?

These factors are as volatile as nitroglycerine and a martini shaker.

You said Thursday that 20,000 pounds of fentanyl could kill “as many as 1,000 people…” Alas, you botched these numbers.

This might be true, if a fatal dose were a 20-pound sack of this drug, dropped from a fifth-story window. However, a lethal amount of the Mexican cartels’ poison is just 2 milligrams, about the weight of a mosquito. Thus, those 10 tons of fentanyl could kill 9,071,840,000 people — exceeding Earth’s population.

En route to Arizona on Dec. 6, you told Fox News White House correspondent Peter Doocy that you would not visit the border “Because there are more important things going on.”

May your journey to the U.S.-Mexico line show you that the border crisis that your policies created is today’s most important thing going on.

The views and opinions expressed in this commentary are those of the author and do not reflect the official position of the Daily Caller News Foundation.