Several Republican states, including Florida, Louisiana, Arizona, Utah, South Carolina, Missouri and Arkansas, divested their state funds from BlackRock, which manages $8 trillion in assets, after alleging that the firm’s efforts toward meeting its climate targets have compromised its financial responsibility to its clients. BlackRock views climate change as a significant financial risk and wants businesses to significantly reduce their carbon emissions in order to reach “net zero” targets by 2050, in accordance with the United Nations Paris Climate Agreement.

“What we’re trying to do is ensure that we’re being good stewards of taxpayer dollars and that we don’t have a conflict of interest … so we’re not going to do business with anymore that’s trying to diminish the funds that they are managing,” West Virginia State Treasurer Riley Moore told the Daily Caller News Foundation. “BlackRock is trying to diminish those funds through its investment strategy.”

In January, Moore barred BlackRock from managing the state’s operating funds which were worth up to $8 billion. Moore also banned five major banks from doing business with West Virginia after saying that the banks were boycotting fossil fuel companies in order to advance a green agenda, and formed a 15-state coalition, which represents over $600 billion in assets, that vowed to stop dealing with banks that impose “boycotts” on oil, gas and coal producers.

“They’re trying to push their left-wing agenda through our capital markets and the financial sector because they can’t accomplish these goals at the ballot box,” Moore said.

Republican Florida Chief Financial Officer Jimmy Patronis announced on Dec. 1 that the state would divest $2 billion from BlackRock by the end of 2022 because the firm was engaging in environmental, social and corporate governance (ESG) investing and using state money to fund its “social-engineering project” instead of maximizing returns on investment. The company called Patronis’ move a political stunt and said that the decision would ultimately hurt Florida’s citizens by sacrificing their access to “high-quality” investments, according to a statement.

“Groups that these states had literally contracted to manage pension fund dollars responsibly used those same funds to push aggressive actions against key sectors of their economy like fossil fuels,” Will Hild, executive director of Consumers’ Research, a conservative nonprofit, told the DCNF.

Republican Arizona State Treasurer Kimberly Yee revealed on Dec. 8 that her state had removed $543 million worth of pension funds from BlackRock’s control throughout 2022. Yee stated that the asset manager was not acting in the financial interests of the state as it pushing “wokeism” and forcing businesses to follow BlackRock CEO Larry Fink’s political beliefs.

GOP Missouri Treasurer Scott Fitzpatrick declared in October that Missouri’s pension system had taken $500 million out of BlackRock’s hands because the firm had chosen to force a “left-wing social and political agenda” on publicly traded companies.

“All the money that has been taken away from them represents a tiny portion of their assets under management,” Hild noted. But these divestments are hurting their growth and are increasing exponentially, which shows that BlackRock is going in the wrong direction financially.” 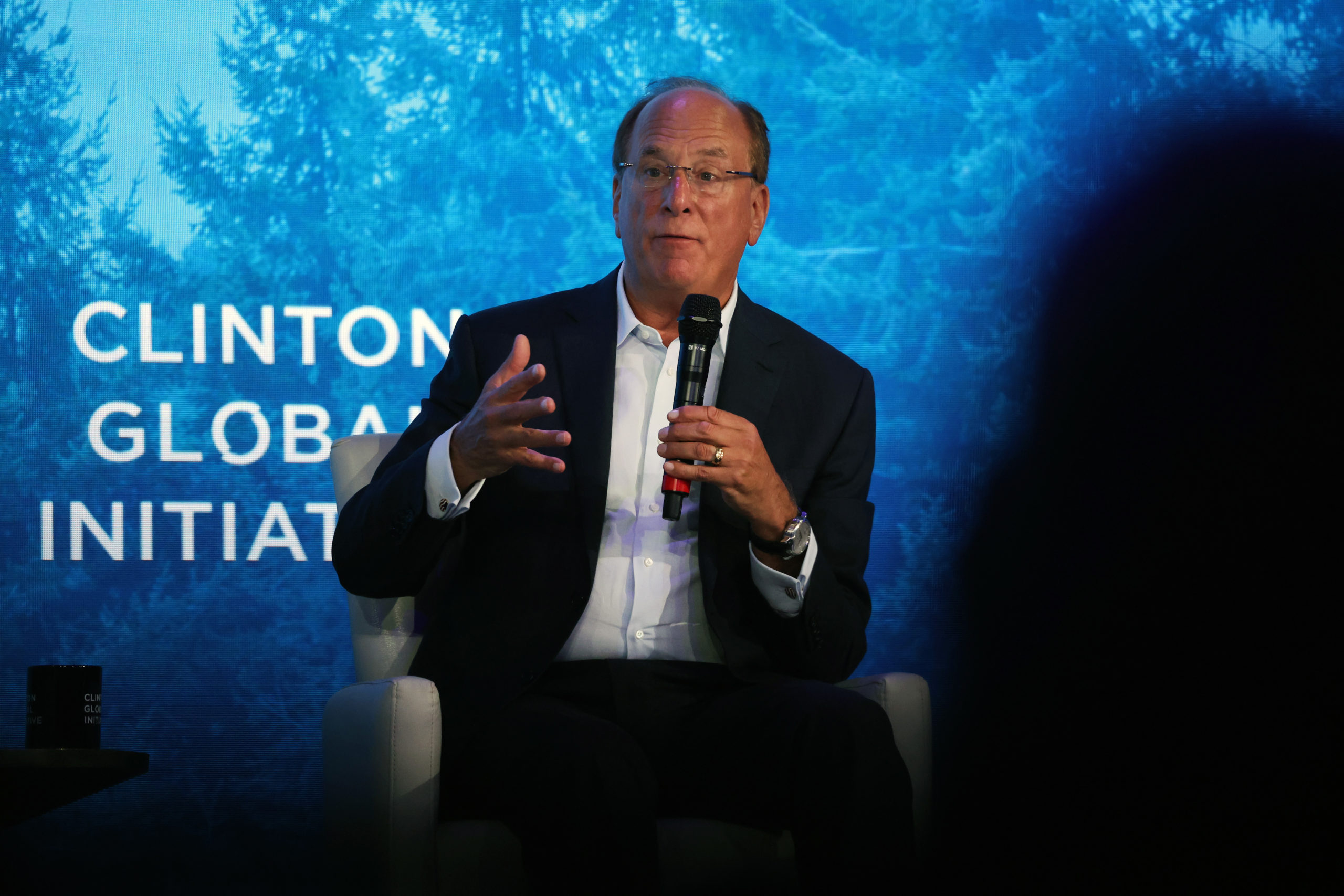 BlackRock CEO Larry Fink speaks at a forum during the opening of the Clinton Global Initiative (CGI), a meeting of international leaders which looks to help solve global problems, on September 19, 2022 in New York City. (Photo by Spencer Platt/Getty Images)

“We’re asking for something very simple, and that’s for the free market to remain free,” Moore stated. “We don’t want distortions and coercion of capital towards industries that aren’t actually profitable … we want to see taxpayer dollars, chase returns and not ideas.”

Fink is being investigated by 19 Republican state attorneys general for potentially boycotting fossil fuel producers and prioritizing “left-wing political initiatives over shareholder returns.” BlackRock responded to the attorneys general in September, stating that it had approximately $170 billion invested in energy companies and said it never forced businesses to adhere to its climate targets.

In August, Texas State Comptroller Glenn Hegar released a list of 348 banks and ten investment managers, including BlackRock, that will be banned from doing business with the state because they allegedly boycott energy companies and violated the state’s laws. The state enacted a law in 2021 that bars the majority of state agencies and local governments from enlisting the services of such institutions.

“This action is significant because we’ve seen Blackrock start to hedge its public position on ESG because it is certainly starting to feel the pressure,” Moore said.

BlackRock will make “few changes” to its shareholding voting, stewardship and investing policies in 2023, according to its annual stewardship report. The financial giant is a member of the Net Zero Asset Managers initiative, an alliance of financial groups that supports climate investments to get the world to produce “net-zero emissions” by 2050 or sooner.

BlackRock referred the DCNF to its previous statements regarding its investing decisions.