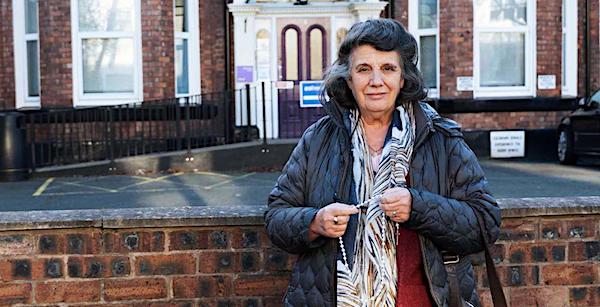 A grandmother who was punished by police in the United Kingdom for walking and praying – silently – near an abortion business has overturned her fine.

Officials with ADF UK, who worked with Rosa Lalor, 76, from Liverpool, on her case said police in Merseyside, who had imposed the punishment, “have now conceded that such detention was wrong, and that Lalor was acting within her rights.”

The organization explained the case developed in February 2021 when Lalor was approached by a police officer during a lockdown and questioned as to why she was outdoors.

She explained she was “walking and praying.”

The officer then charged that that was not a “reasonable excuse” for her to be outdoors, and arrested and detained her, then fined her.

Labor, in a statement release through her legal team, explained, “I’m delighted that the prosecution has finally dropped this charge after a long and exhausting battle for justice. I took this challenge forward with support from ADF UK to show that we do all have a fundamental right to pray – not least pray as I did, in the privacy of my own mind. It was wrong for the police officer to tell me that I could not pray in a public street. It’s important for officers to respect basic religious freedom, and improve their understanding of how that right manifests, in order to maintain a truly tolerant society.”

The fight, however, is far from over. ADF UK explained the Liverpool council now is insisting on “censorship zones” that would prevent the prayers by Lalor.

And there’s a bill in Northern Ireland that would shut down speech within 100 meters of an abortion business.

Lalor’s defenders had explained to police that what she was doing was reasonable, and actually protected by Article 9 of the European Court of Human Rights, “which states that everyone has a right to manifest their freedom of thought, conscience and religion” in public or private.

Jeremiah Igunnubole, legal counsel for Lalor’s case, explained, “We’re thrilled to celebrate a victory for Rosa today, but it is deeply regrettable that this law-abiding woman was subjected to distressing, drawn-out criminal proceedings in the first place, no doubt due to her pro-life stance. This follows a worrying trend in law enforcement where individuals are routinely arrested simply because their views are considered to be controversial or offensive.”

The focal point of the legal fight was that police officers are not allowed to arrest someone “based solely on their interpretation of the legitimacy of a particular point of view.”

Igunnubole said the circumstances of the case amounted to “viewpoint discrimination,” which is also banned in the United States.

It’s not the first conflict for the police department. Months ago officers had warned that “being offensive is an offense,” but then had to retract that statement and apologize.

The agenda in the U.K., however, is moving the wrong direction for individuals’ rights.

The report explained, “Liverpool and Bournemouth councils have recently launched consultations about bringing in the measure, which would prohibit pro-life volunteers from speaking – including giving offers of financial and practical help to women looking for an alternative option to abortion – on public streets in the vicinity of abortion facilities. Aberdeen council approved measures to censor public street last week.

“In Richmond and in Ealing, where buffer zones have already been implemented, even silent prayer is prohibited in the 150m zone – a move likely to be copied by other councils,” the report said.