On Monday, Iran threatened that the “hard revenge” for the killing of Quds Force leader Qassem Soleimani will come from “within” the U.S. Iranian Brigadier General Esmaeil Qaani delivered a speech on the anniversary of the “martyrdom” of Soleimani, where he stated:

We will prepare ground for the hard revenge against the US from within their homes, as we do not need to be present as supervisors everywhere, wherever is necessary we take revenge against Americans by the help of people on their side and within their own homes without our presence.

Iran habitually talks tough. But it remains to be seen whether the regime will test the resolve of a weak, waffling Biden administration. However, given Iran’s fragile economy, water woes, and desperate need for “friends” to accept a nuke deal that will see billions flow into its coffers, Iran’s talk is more likely empty bravado intended to intimidate.

This regime is unpredictable; still, the American threat of retaliation is welcome. 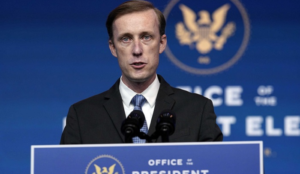 “US warns Iran of ‘severe consequences’ if they take revenge with an attack,” by Morgan Phillips & Keith Griffith, Daily Mail, January 11, 2022:

The U.S. issued a dire warning to Iran as the Islamic Republic warned of ‘hard revenge’ for the killing of General Qassem Soleimani at the two-year anniversary of his death.

Iran over the weekend sanctioned dozens of U.S. officials for alleged involvement in the attack on Iran’s former top general.

‘We will work with our allies and partners to deter and respond to any attacks carried out by Iran,’ Sullivan said in a statement. ‘Should Iran attack any of our nationals, including any of the 52 people named yesterday, it will face severe consequences.’

Soleimani, the commander of Iran’s Quds Force, the overseas arm of the elite Revolutionary Guards, was killed in Iraq in a drone strike on January 3, 2020, ordered by then-President Donald Trump.

‘We will prepare ground for the hard revenge against the US from within their homes,’ said Soleimani’s replacement, Brigadier General Esmail Ghaani, at a memorial service in Mashhad this week, according to Tasnim News.

‘We do not need to be present as supervisors everywhere, wherever is necessary we take revenge against Americans by the help of people on their side and within their own homes without our presence,’ he added….

This article by Christine Douglass-Williams originally appeared on JihadWatch.org and is republished with permission. ©All rights reserved.

Robert Spencer
Robert Spencer is a guest author for NRN, the director of Jihad Watch, and a Shillman Fellow at the David Horowitz Freedom Center. He is author of 23 books including many bestsellers, such as The Politically Incorrect Guide to Islam (and the Crusades), The Truth About Muhammad and The History of Jihad. His latest book is The Critical Qur’an.

Latest posts by Robert Spencer (see all)
Share to break through the censorship!