Can Americans Expect It To Be Used?

The United States Constitution served to underpin several political battles in 2020. The results of the 2020 Presidential Election are still up in the air and Americans are preparing for the possibility of a President Kamala Harris. The 25th Amendment is home for one of the latest workouts of the Constitution’s inner workings. Speaker of the House Nancy Pelosi held a press conference last October outlining her plan for the House of Representatives to bring forth legislation that would establish a commission with the power to assess the president’s fitness to serve.

Pelosi cited Section 4 of the 25th Amendment, which permits the Vice President “and a majority of either the principal officers of the executive departments or of such other body as Congress may by law provide” to transmit a written declaration that the President is unfit or unable to serve. Naturally, Pelosi’s proposal triggered yet another Constitutional debate that puts into question the balancing of powers between the three branches of government. Pelosi’s plan also spotlighted the theory of many Americans that Joe Biden was never truly the one Democrats wanted in power but rather a placeholder for the Democrat’s manipulation.

History has proven that the existence of the 25th Amendment is perhaps very necessary. For example, President Woodrow Wilson suffered a severe stroke in 1919 that left him incapacitated and unable to fulfill his duties as President of the United States. Despite, President Wilson’s incapacitation, his wife Edith conspired to hide the President’s condition. Historical rumors credit Edith as Acting President of the United States for the duration of Wilson’s term.

The 25th and Past Presidents

Before the Amendment was ratified in 1967, each administration was left to decide on the issue of Presidential incapacitation. President Eisenhower was incapacitated twice while he served as president of the United States, leaving Richard Nixon to step in as Acting President. After President John F. Kennedy was assassinated in 1963, the 25th Amendment was quickly ratified by 1967. Though Section 4 of the Amendment has never been invoked, there was a close call after President Ronald Reagan was shot. Vice President Bush became the Acting President in Reagan’s stead. However, President Reagan did not become incapacitated and was able to resume his duties as President of the United States.

The fact that Section 4 of the 25th Amendment has not yet been invoked does not mean the Constitutional provision is unimportant. However, given Pelosi’s and the Democrats’ numerous acts that have been carried out in bad faith, most recently seen in the announcement of a Joe Biden win despite the fact that the votes are still being counted, shows Pelosi and the Democrats simply do not have the American people’s best interests in mind. The Democrats only want one thing: totalitarian power. Perhaps Pelosi proposed the legislation in preparation for a potential President Trump re-election

As it stands, as many states continue to count votes and legal challenges of voter fraud arise, it may very well be that the Democrats will attempt to remove President Trump over the next four years should he win. Regardless, the Constitution is clear. Even if Congress through a majority exerted their power to invoke the 25th Amendment, the Vice President must also invoke the 25th to trigger Section 4. It is not only unlikely, but a seeming impossibility that Pelosi and the Democrats could successfully weaponize the amendment against President Trump upon his reelection because it would require Vice President Pence to be a co-conspirator.

The 25th and Joe Biden

The results of a fair and free election are fundamental to the United States since the Executive leader of the country should represent the voice of the people. Former Vice President Joe Biden’s capacity to hold the highest office is questioned frequently. Joe Biden’s mental capacity is questioned so often, in fact, that it is rumored the Democrats lack faith in his ability to lead the country, as well. If Joe Biden becomes President-elect and the Democrats maintain the House majority they would then be armed to oust Joe Biden in favor of Senator Kamala Harris.

It is not unreasonable to conclude that collusion between Kamala Harris and a Democrat majority in the House of Representatives would abuse the 25th Amendment to manipulate and control the Executive office. Considering Congress’ assumed power, the power of the peoples’ vote is diminished if not invalidated completely. Given the number of unprecedented events that occurred in 2020, it would be no surprise if the Democrats attempted a total and complete assertion of control. The 25th Amendment would no longer be a safety net but a political weapon that will continue to add to the ebb and flow of imbalance between the three branches of government. 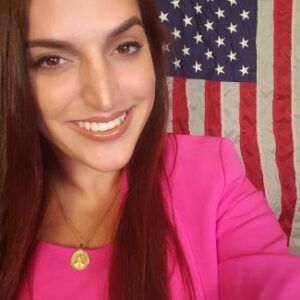 Latest posts by Christy McLaughlin (see all)
Share to break through the censorship!