What is playing out, real-time, in Louisiana right now is exactly what everyone knew would happen five months ago. No, I’m not talking about the Wuhan Virus. The looming question is why Louisiana won’t reopen.

Back in January, the Louisiana Speaker of the House was bought and paid for. Thanks to 35 Democratic Party votes delivered by Governor John Bel Edwards (D) and a large portion of the Acadiana Republican delegation blindly following Stuart Bishop across the aisle, Louisiana’s legislative power now rests with a man who owes that power to Edwards.

It all started with #OurSpeaker, Taylor Barras

Back in the good old days (the previous four years), speaker Taylor Barras was in a constant battle with the governor over just about everything. To satisfy his own incessant cravings for more and more taxes, Edwards declared one special session after another. When new taxes did not materialize, he declared another and then another. At one point, he was even delivering cookies to press members camped out near the mansion in anticipation of the next special session announcement.

.@LouisianaGov extends olive branch to the press. Too bad I’m on the #whole30 #mansioncookies #lagovpic.twitter.com/Qg8rdZQB3h

The battle was epic, and regular. Some legislators said they aged years in those months. Since the elections last year, the new legislature came to power and had to choose their own speaker. With 68 of 105 members, a solid 65% of the body, it should not have been difficult to find 53 Republicans to agree on a conservative speaker. Instead, what happened defies all logic.

In January, when the new legislature was sworn in, the Republican delegation held a meeting to determine their speaker. The main two contenders were Sherman Mack and Clay Schexnayder. In order to take an official position, agreement must be had among 2/3 of members present or 50% + 1 of total members in the delegation, whichever is greater. At the delegation meeting, there were fifty-eight (58) of the sixty-eight (68) total members present. The math on two-thirds of fifty-eight (58) members present would be thirty-nine (39).

The Governor Had Learned His Lesson

After the delegation vote, Edwards (a trial lawyer by trade) and his political machine began attacking Sherman Mack (a general law attorney) as a billboard lawyer and ambulance chaser. Everyone knew one of the main goals for the upcoming regular session was tort reform. Painting the Conservative choice for speaker as a trial lawyer who’s least likely to address it was the perfect play. It was so good even Conservative outlets like The Hayride ran with it. The full-swing public relations campaign hit news outlets from every possible angle. Even Tiger Droppings got in on the action.

In the days running up to the speaker vote, it was the talk of Baton Rouge and the state. However, what wasn’t being talked about were all the secret back-room deals being hatched by the governor. Those deals were swirling around Lafayette representative Stuart Bishop. His name even appears atop the speaker vote tally sheet as nominating the governor’s speaker candidate, Clay Schexnayder.

How do we know Schexnayder was Edwards’ candidate for speaker? Because Edwards was whipping all the Democrats to vote for him. In fact, not only did all thirty-five (35) Democrats vote for Schexnayder, but the very weak twenty-three (23) Republican votes represent only thirty-three percent (33%) of their delegation.

For the last year or more, rumors had been echoing throughout the political universe about Lafayette’s Stuart Bishop running for Speaker. However, his not being popular in the delegation made certain victory doubtful. Add to this, Lafayette’s Page Cortez was already a lock for Senate president. Having both chambers controlled by the same city absolutely precluded Bishop from any chance as Speaker. However, his ability to manipulate votes in the Acadiana delegation could at least provide leverage for a prominent committee post.

Other committee positions were also made available to those he could sway. With the promise of importance, the “gang of twenty-three” quickly formed ranks behind Bishop. From the original seventeen Republicans who initially voted for Schexnayder, the new impetus gathered up six more, along with all thirty-five Democrats and both Independents. After everything shook out, Stuart Bishop landed the chairmanship for the single most powerful committee, Ways & Means, a committee on which he had never served.

Why is This Important Now?

There are several efforts underway to get Louisiana back to work. Both of them involve diluting or removing the governor’s emergency declarations. The Seabaugh Petition needs 53 representative (or 20 senator) signatures, while the Miguez Concurrent Resolution requires considerably more work. HCR-58 managed to get out of a contentious committee on Wednesday. We expected it to be on the floor on Thursday, but it has been delayed until at least May 13th. After that, it will have to get through a similar and potentially two-week process in the Senate.

All this is happening because Governor Edwards had been promising May 1st as the day Louisiana would reopen. Originally, he said April 13th, but pushed it back. As his second date approached, he even made robocalls informing citizens that there were “only ten days to go, we can do this!”

Then, only a few days later, his press release changed tune. Now, the small businesses he shut down would have to wait until May 15th. That began a chorus of voices from all over the state saying they just cannot hang on anymore. Just a few miles from my home, Landry’s Seafood House announced they were closing forever. Their business had been a landmark of the Henderson exit on Interstate-10 for some forty years. Now, it is relegated to the dustbin of history all because the governor has refused to allow restaurants to operate. Similar stories abound.

All Eyes on Monday

Edwards has scheduled another press conference for this Monday, May 11th. Based on recent statements, everyone is expecting him to extend his stay at home order for another two weeks. In fact, the governor is even planning to hire 700 new bureaucrats just to enforce these orders! Does that sound like someone planning to open the economy? No! But why Louisiana won’t reopen?

If predictions are right, Louisiana’s economy will be on hold until at least June 1st. Many expect this to continue happening, in two week increments, for the foreseeable future. The impact of these policies is also causing severe damage to local governments. The City of Lafayette has been warning that sales tax collections are way down year-over-year. Just for April, tax losses are over one million dollars!

The Louisiana Republican Party, which still technically controls nearly two-thirds of the legislature, has openly opposed these extensions — starting with the one we are currently under. While the Party’s opposition is clear, their intention is not to turn everything back on instantly. Instead, they have suggested the state should relinquish some authority to the parish and city governments to make their own determinations. Why shouldn’t the parish or city be allowed to cautiously open their economy if the Wuhan Virus is not impacting them?

The process of states delegating local issues to local authorities is a centerpiece of Federalism. It is a founding philosophy that is even enshrined in our national constitution. The tenth amendment is probably the clearest example. It reads, “The powers not delegated to the United States by the Constitution, nor prohibited by it to the States, are reserved to the States respectively, or to the people.” Similarly, we have parish and city government for a reason. Allowing them to do what’s best for themselves makes sense.

Why Wait? The Legislature May Return Power to the People at Any Moment

In short, it takes 20 members of the Senate or 53 members of the House. It does not require both chambers to act, only one. This is something Representative Alan Seabaugh (R) has been actively working since May 1st. You can read his petition here. So far, he has not acquired the 53 signatures required to overturn the governor’s emergency order and return emergency powers to the people. With 67 Republicans in the house, this should be an easy task. So what’s the problem? Why Louisiana won’t reopen?

Remember? The Governor Controls the Legislature

The latest round of communications I have been having with state legislators suggests they are all waiting to see what the governor will do on Monday. This is the same governor who promised April 13th, then May 1st, then May 15th, and now who knows? The Speaker of the House owes his position of power to Stuart Bishop’s gang of 23 and the governor’s 35 Democratic votes.

Do you really believe the twenty-three Republicans who have been enjoying new-found influence and power are ready to give all that up just to save you? If we judge our chances on who voted for John Bel Edwards’s speaker preference, Alan Seabaugh only has 44 Republicans to work with. That is nine votes short of reopening Louisiana. It’s possible, but it will be difficult to peel off any of the “gang of 23” Republicans now owned by Edwards. 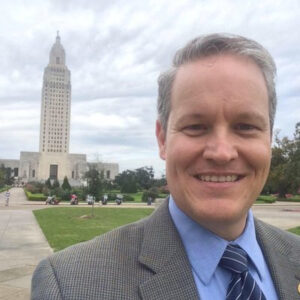 Latest posts by Michael Lunsford (see all)
Share to break through the censorship!