Ask Not What Your Country Can Do For You

Unlike any President in recent memory, Donald Trump is actually keeping promises he made on the campaign trail. Officially, President Trump has kept 60 of his 98 Campaign Promises. To put that in perspective, Obama and Bush 43 kept 0. We will now look at all of the Promises he has made and kept.

On January 17, President Trump will have been in office three years, and no other Administration in history has done this much for us.

Keeping promises isn’t always easy, especially in this polarized political environment. Many of Trump’s campaign promises are now Overcome by Events (sorry old Army saying, we just like to say “O”, “B”, “E”). Several are about ISIS pre annihilation and so on. Stay tuned as in January, New Right Network will publish a list of all his 98 campaign promises and their latest status.

According to Gene Huber, POTUS-45’s “Superfan”, “President Trump tells us we Live in one household, It’s not the White House, it’s Our House”  Gene has been to 19 Rallies, and asserts that the general feeling at every single one is the same “because it’s all LOVE and excitement, and we Unite as one to Love each other and President Trump.”

As many of you know, Gene is the guy that hugged Trump on stage at a Trump Rally. He says “President Trump Loves the People and this Country First, he tells us that he is just the Messenger and We do this together as a Family.”

This has been an extraordinary year, as 2019 will be remembered for several yuge promises that President Trump kept, such as getting The United States Mexico Canada Agreement (also known as the USMCA) passed into law. Here’s a funny story how Trump punked the crap out of Crazy Nancy Pelosi (D CA-12 San Francisco). She wasn’t going to pass the USMCA because it would be a YUGE win for our President.

So Trump starts calling her out, saying that she has to pass it, as ALL of the Democrat Representatives that are in “Trump Districts” will face a hostile crowd when they return home for the Christmas break. At the same time, Trump is pressuring China to sign the “Phase One” deal on Trade or there will be more tariffs slapped on the goods they sell to us. A little back story: experts tell us that China (and especially their Premier Xi Jinping) are in trouble.

The Chinese economy must grow by at least 7% or it’s a loss. It grew at only 6% and was the lowest rate since 2009. Due to a swine flu epidemic, they have had to destroy half of their hog population. China needs this “Phase One” deal in a bad way. China now feels immense pressure as according to Peter Navarro Trump’s Special Assistant on Trade and Manufacturing Mexico is five times the trading partner that China is to us.

Back to crazy Nancy. She needs to impeach Trump to settle her base and keep her job as speaker. She also needs to help out her base in “Trump Districts.” The compromise was to have the impeachment vote on a Wednesday, followed by the USMCA vote on the following Thursday. Imagine Trump is shooting skeet and just yelled “pull.” Two clay discs soar through the air, almost colliding. He pulls the trigger, bang! Both clay pigeons turn to dust in one shot.

How he maneuvered both opponents into the kill zone was ingenious. These deals (USMCA and China) will end up being the largest, most enduring financial benefits for not just America but for both our neighbors. This is exactly what Trump means by winning. History will prove him to be the best President, not just for the USA but for the World as this “rising tide lifts all boats”. 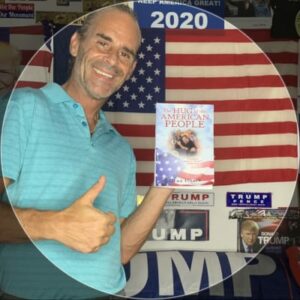 Gene Huber
Gene Huber is a writer for NRN. On February 14, 2017 at the MAGA Rally in Melbourne, Florida, President Trump called Huber on stage and he hugged the president and spoke to the world. Huber portrays this hug as "The Hug of the American People," that’s also the title of his book.

Latest posts by Gene Huber (see all)
Share to break through the censorship!