PragerU’s aggressive short-video content strategy has triggered a multitude of YouTube algorithms over the past couple years. It came to light two months ago that YouTube is driven by an AI program called “Machine Learning Fairness,” brought out by Google whistleblower Zach Vorhies. The former Google senior software developer claimed that even he couldn’t undo the automated AI censorship in motion. To find out more about PragerU, their lawsuit vs. Google and YouTube, and their plight with censorship, NRN reached out to Isabel Brown of PragerU. Brown is a conservative social media influencer bringing attention to the leftist indoctrination students face on college campuses through hosting PragerU’s On The Front Lines, a video series interviewing conservative students from across the nation. Brown is also a contributing influencer for Turning Point USA (TPUSA). She is a student herself, pursuing her Master’s Degree at Georgetown University in Biomedical Sciences Policy and Advocacy.[/vc_column_text][/vc_column][/vc_row][vc_row column_type=”block” font_color=”light” background_type=”video” video_bg_url=”https://www.youtube.com/watch?v=s9TgkdPcrBI&list=PLDpAcBxVpKGrLISSDfnfe6OUYka70p8Bf&index=3″ video_bg_start_time=”139″ video_bg_end_time=”900″ video_bg_parallax=”true” add_overlay=”yes” overlay_opacity=”20″ bt_text=”PragerU” bt_font_weight=”300″ bt_font_style=”italic” shift_y=”0″ z_index=”0″ add_bigtext=”true” min_height=”100″ bt_max_width=”300″][vc_column][wvc_video_opener caption_position=”bottom” video_url=”https://www.youtube.com/watch?v=s9TgkdPcrBI&list=PLDpAcBxVpKGrLISSDfnfe6OUYka70p8Bf&index=3″ caption=”PragerU Spotlight: RIGHT NOW At NRN W/Isabel Brown”][/vc_column][/vc_row][vc_row][vc_column][vc_column_text]As a recent graduate of Colorado State University, she endured leftist backlash while engaging in conservative politics on campus as a TPUSA chapter President. Isabel is a former U.S Senate and White House Intern and also served in student government during her time at CSU as a Senator and Speaker of the Senate. In her podcast interview with NRN, Isabel told interviewer Brittany Slaughter that PragerU is currently in a court battle with YouTube over censorship.

“I can’t talk too much about the logistics of the court case just because of legality reasons,” She said, “But PragerU spoke up! And they decided to sue, and they said ‘You know what free speech is just as important online as it is when I’m using my mouth to speak out loud.’” The case has gone to the state and federal level.

Speaking of PragerU’s decision to sue Google and YouTube, and where free speech is at today, Brown said, “I’m sure our founding fathers never could have imagined that something as easy as a Skype conference like this podcast that we’re doing today, or putting something on your Twitter page is just as fundamental when it comes to our first amendment right as walking outside to the sidewalk and saying whatever I want to say.”

Isabel Brown told NRN that over 200 of their videos have been censored on the internet due to their videos being determined inappropriate. She goes into detail about how that works, saying, “So essentially how they explained this to PragerU is that they operate in something called restricted mode for some people who are interested in viewing YouTube videos. So, if you’re a minor, if you’re at a school, if you’re at a church, they use the IP addresses at those places to monitor what you can and cannot access. So even if you’re a minor and you were able to access that video at home, you may not be able to access it at school, or on your phone, or something like that, because you are a minor.”

Their videos were being branded with all sorts of labels. Brown tells NRN of just a few of them. “So these videos became censored a while ago, and we started to realize they’re being censored for absolutely ludicrous reasons. They said that, you know, there’s nudity and inappropriateness in them like pornography, and we said ‘Well that’s crazy.’ You know, all sorts of labels that don’t even make sense at the end of the day.” Brown, however, says their videos are far from inappropriate.

She told NRN the videos are only five minutes long, and cover a variety of topics. They also provide links that lead to more information for those that want to research the topic further. “They’re all very educational. Our bread and butter is five minute videos where we educate the public, sort of about the 100 level, if you’re using a college analogy, of any topic in five minutes. It’s fantastic, it’s useful, it’s the truth when it comes down to the end of it.”

Thousands of people have signed a petition that backs PragerU in support of free speech. Speaking of the fight for free speech, and the people who have joined the battle, Brown says, “But it’s been such an interesting journey to see this fight for free speech and how other people have joined in. Thousands of people have signed our petition against Google and YouTube to say that they stand for free speech online, and the growth of this movement has been very inspiring.” The petition can be signed here.[/vc_column_text][/vc_column][/vc_row][vc_row][vc_column][vc_column_text]PragerU is not the only conservative source being censored by YouTube, however. Reclaim the Net recently had their ability to stream taken away. The company has gained over 300 million views since starting and has done nothing to have their rights revoked. Their website states that YouTube is working to fix the issue and they hope to be back live streaming soon.

As for PragerU, that remains to be seen.Censorship isn’t the only thing Isabel Brown speaks out against. The popular influencer also talked briefly about Socialism, and particularly a certain Democrat Congresswoman’s rather unfortunate comments.

Democratic Socialist Rep. Alexandria Ocasio-Cortez, D-N.Y. believes Republicans are failing to scare voters away from Socialism, according to her tweets, comparing Capitalism to using GoFundMe as our national healthcare system.

Ocasio-Cortez also tweeted the assumption that Republicans were engaging in unsuccessful tactics that were used in the Cold War. “The ‘old-fashioned red-baiting approach, familiar to those of us who lived through the Cold War, doesn’t seem to be working,” she said. All of this was in response to the Republican narrative that Ocasio-Cortez and Democrat presidential candidates were promoting Socialist policies, most of which can be found on the New York representative’s platform page.

Several 2020 candidates openly endorsed Ocasio-Cortez’s “Green New Deal” and shared her support of “Medicare-for-all”, both policies that call for massive government intervention, and also the reason Republicans call them “socialist policies.” Ocasio-Cortez’s “Green New Deal” resolution aimed to push the US to take a lead role in reducing carbon emissions through the economy with a long list of extreme changes. She is calling for large-scale solutions to combat climate change.

Ocasio-Cortez claims that the cost of action was lower than the death and monetary damages that would result from inaction. She even warned that melting glaciers could unleash a variety of different diseases that the modern world is not prepared to deal with. The “Green New Deal” was up for a procedural vote in the Senate last March and failed to pass. The final vote was 57 against and 0 for the plan. Ocasio-Cortez called the vote a political stunt and slammed Republican lawmakers for “climate delaying.”

Brown had this to say: “She got her degree in economics so she should fundamentally understand what Socialism is. But I think this whole concept of indoctrination and the process of indoctrinating students throughout higher education, maybe she’s just never learned the truth. We have a really unique opportunity to educate more young people about what the truth is.”

Only three weeks after meeting, Conservative commentator and activist Candace Owens, who started the BLEXIT movement, got engaged to former Brexit Party candidate and TPUSA UK member George Farmer. Following a year long engagement, they tied the knot this Labor Day weekend at the Trump Winery in Charlottesville, Virginia. Just before the wedding, Candace introduced her fiancé to the world on her PragerU show. “Truly, these are the exact sorts of discussions we have over coffee every morning,” she tweeted. 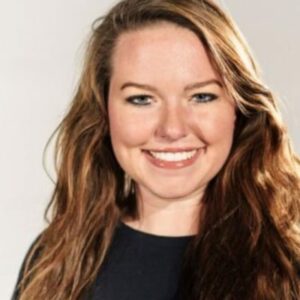 Brittany Slaughter
Brittany Slaughter is reporter for NRN and a student at Liberty University studying journalism with a minor in criminal justice. She is the former editor and writer for the Liberty University Odyssey chapter. Slaughter has had work published in the Washington Examiner and was nominated for Network of Enlightened Women’s Writer of the Year award. She is published in the book "She’s Conservative- Stories of Trials and Triumphs on America’s College Campuses."She is a Virginia Campus Correspondent for Campus Reform and a writer for The College Fix. Brittany Slaughter serves as the Secretary for Liberty University’s College Republicans Chapter and is a member of King’s Players traveling drama ministry team.

Latest posts by Brittany Slaughter (see all)
Share to break through the censorship!