ATLANTA, Ga. – A crowd of freedom-loving Conservatives organized a gathering to counter the National Convention of the Democratic Socialists of America (DSA), hosted in the heart of the south, Atlanta! Today, the Make America Great Again (MAGA) marchers started on the sidewalk in front of the Westin Peachtree Plaza in downtown Atlanta, wearing MAGA and Keep America Great (KAG) hats and Trump shirts while carrying signs and banners.

The contrast could not have been starker on the streets on Atlanta outside the Democratic Socialists of America convention between the diverse multi-racial group of MAGA hat-wearing Trump Supporters and the mostly hipster DSA delegates to Georgia.

While the Antifa-Left attacks citizens and journalists, the conservative-minded Southerners set out to show how it’s possible to disagree politically while being friendly at the same time. After all, “The United States will NEVER be a socialist country!” said President Donald Trump at his latest State of the Union address.

James Dutton, one of the march organizers said, “We wanted to show that Southerners can be friendly even when we strongly disagree politically.”

Some initial attempts at bullying the MAGA marchers were quickly dispersed as more and more Trump supporters arrived. “They don’t want to pick a fight when they are outnumbered. Once we had the numbers, they left us alone,” said Dutton.

Politeness and good-natured discourse was the rule throughout the morning. Brant Frost, Vice Chairman of the Georgia Republican Party, said, “In a world where it seems that a Conservative takes their life in their hands whenever they get within a block of a leftist group, it gives me hope for our country to be able to have a peaceful and friendly conversations with our socialist visitors, deluded though they may be, without anyone getting hurt or angry.”

Congressional candidate Kenneth Brown was also in attendance. Brown said: “Conservatives and Republicans must stop the DSA. We are not a Socialist country. We believe in freedom, liberty, opportunity, free enterprise, self-reliance, and personal responsibility. These are principles that made our country strong and proud!”

Frost also endorsed Senator Ted Cruz’s resolution to Name Antifa Domestic Terrorist Organization. “It’s time for the Justice Department to follow Senator Cruz’s advice and open a RICO investigation into Antifa. This is still America and will not stand for Communist tactics. We beat the Communists in the Cold War and we will beat them again with all the legal force we can muster, rooted in justice, backed up by moral courage.” 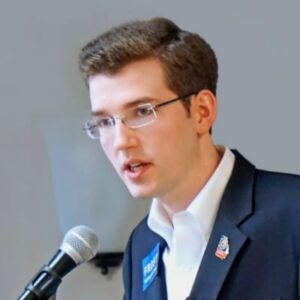 Brant Frost
Brant Frost is a contributing author for NRN. Frost is the Vice Chairman of the Georgia Republican Party (GAGOP).

Latest posts by Brant Frost (see all)
Share to break through the censorship!