Lindell said Tuesday FBI operatives subpoenaed him at a Hardee’s drive-thru for his cellphone related to an election security breach, in which someone was allegedly enabled to access Colorado voting machines without authorization, CNN reported. Frank, a math teacher who has argued former President Donald Trump won the 2020 election and is affiliated with Lindell, according to The Washington Post, claimed on Telegram that federal agents confiscated his phone as he disembarked from a plane Thursday. 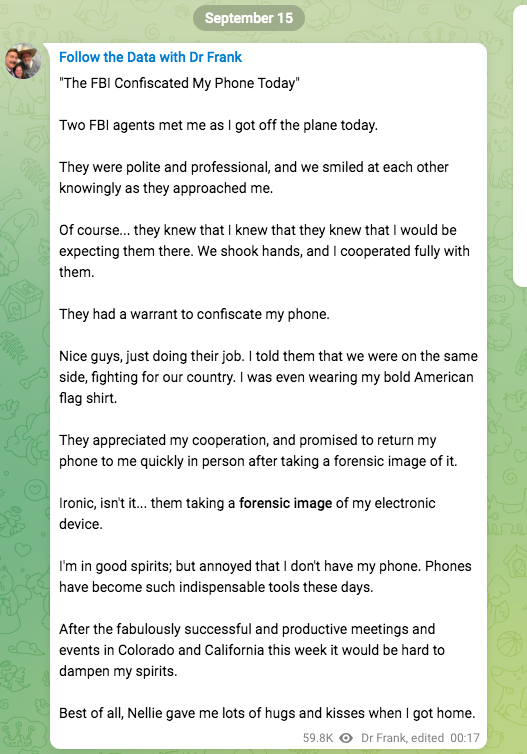 “Two FBI agents met me as I got off the plane today,” Frank wrote on Telegram. “They were polite and professional, and we smiled at each other knowingly as they approached me. Of course… they knew that I knew that they knew that I would be expecting them there. We shook hands, and I cooperated fully with them. They had a warrant to confiscate my phone.”

In a CNN interview, Lindell said agents questioned him about Mesa County, Colorado, clerk Tina Peters, who is charged over the alleged Colorado voting machine scheme.

Multiple probes are examining purported security breaches of local election offices in Mesa County and states including Georgia and Michigan that allegedly sought evidence of 2020 election rigging via voting machines, according to the Post. Investigators looked for evidence of Lindell, Peters, Frank and others allegedly breaking federal anti-identity theft and intentional protected computer damage laws, according to warrant documents Lindell featured on “The Lindell Report” program Tuesday evening.

Lindell has worked with Frank, who says he uncovered secret algorithms used to rig the election, the Post reported. Frank previously told the outlet he showed Peters in April 2021 “how her election was hacked.”

Lindell said the FBI agents told him his subpoena was not related to recent investigative work connected to the Jan. 6 investigation, according to CNN. He claimed he surrendered his cell phone but told the agents to “bring me to January 6,” saying he wanted “to be part of that show.”

The FBI and Frank did not immediately respond to the Daily Caller News Foundation’s request for comment.