The U.S. House of Representatives voted Friday to pass the fraudulently titled Inflation Reduction Act (IRA). The $739 billion tax-and-spending bacchanal includes $80 billion to swell the Internal Revenue Service’s (IRS) payroll from 93,654 to 180,506 – up 92.7%.

These 86,852 new IRS agents are a bit much, if Democrats want them to find billionaires, capsize them and shake them until the gold bars and stock certificates cascade from their pockets. Forbes counts 735 American billionaires. IRA would underwrite 118 IRS agents per billionaire.

Don’t be shocked if IRS audits aim lower — much lower — as they already do.

“I think they’re going after middle-class and small businesspeople because basically they think anybody who has pass-through income is a crook, and they aren’t paying their fair share,”  Republican Sen. Charles Grassley told “Fox & Friends” on Thursday.

Republican Sen. Mike Crapo tried to fix this last Sunday. According to its official description, his amendment to IRA attempted “To prevent the use of additional Internal Revenue Service Funds from being used for audits of taxpayers with taxable incomes below $400,000 in order to protect low- and middle-income earning American taxpayers from an onslaught of audits from an army of new Internal Revenue Service auditors.”

Crapo’s measure died in a 50-50 tie, as every Republican voted yea, and every Democrat said nay. So much for the latter’s lies about defending the little guy. 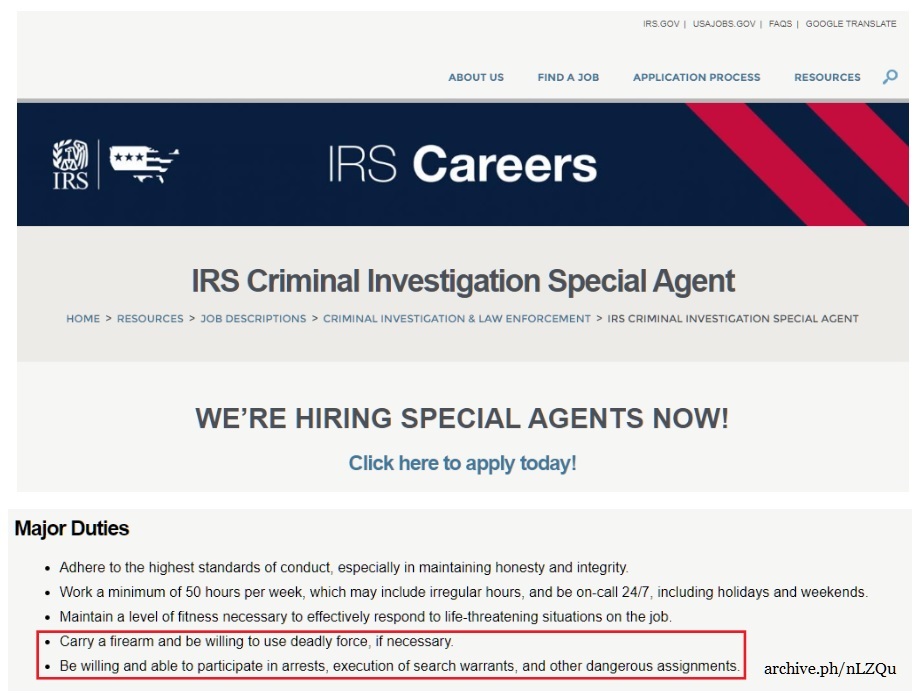 The IRS’ career page describes the employees it seeks. The “major duties” of its Criminal Investigation Special Agents far exceed forensic accounting and cashflow analysis. They include: “Carry a firearm and be willing to use deadly force, if necessary” and “Be willing and able to participate in arrests, execution of search warrants, and other dangerous assignments.”

Like atomic weapons, the IRS’ guns can accomplish plenty without going “Boom!” Deterrence can prevent hostile military attacks as well as tax avoidance.

As Robert M. Wood wrote in Forbes: “Some of the guns the IRS has are fully automatic machine guns. Compared to seeing gun-toting IRS agents at your door, a correspondence audit doesn’t sound too bad.”

“An audit report from the Treasury Inspector General for Tax Administration covering 2009 to 2011 said that IRS Agents accidentally discharged their guns 11 times during that time,” Wood further explained. “The report says that IRS agents fired their guns accidentally more times than they did intentionally. Some of the misfires caused property damage or personal injury.”

The views and opinions expressed in this commentary are those of the author and do not reflect the official position of the Daily Caller News Foundation.