Creating Art, Spreading Conservatism, Doing It My Own Way

What a ride this has been. It has been 10 years and I’ve been politically incorrect all the way. When I graduated from college I worked at the local newspaper as a graphic artist. I drew a few cartoons – editorial cartoons, too. Twenty years in the newspaper business has taught me to produce art and design on a quick turnaround, and I’ve learned to summon up energy that allows me to draw quickly.

After my stint at newspapering, I spent a long time working at my own commercial art business which involved creating complex graphics for corporations and drawing a lot of office scenes of people at desks and business people in various scenes. I used various metaphors in those drawings to make a point. That helped me hone my ability to take metaphors and clichés and carry them over to editorial cartoons that involve the use of satire.

During the presidential election of 2016, I quickly cranked out cartoons after watching debates. I would say “OK. I’m going to draw a cartoon after this debate is over and we’re gonna get it out in the morning.” Now we’re looking forward to President Trump’s re-election cycle and I’ll again turn on the afterburners to get them done.

With the deranged Left, there is no shortage of inspiration. I’m able to draw really quickly and the ideas aren’t that difficult to drum up. I am used to thinking in terms of metaphors and how to crystallize and boil things down in order to communicate information visually.

For years, people have been asking me to publish a coffee table book, which is fairly expensive to do without a publisher. Then I considered doing something special for the 10th anniversary of GrrrGraphics cartoons. After talking to my wife Tina, we agreed that it could be possible through some kind of crowdfunding site like Indiegogo. We both knew we couldn’t do this without our loyal fans’ support.

GrrrGraphics supporters have been with us every step of the way these past 10 years. In 24 hours our 60-day Indiegogo crowdfunding campaign is coming to an end. Now it’s time to publish a big book of cartoons in a limited, signed edition form. We met our goal of $20,000 in under a week. It was amazing to watch our campaign climb to over $80,000 in contributions and 400% over our initial goal.

Now we’re excited to announce the upcoming release of our first coffee table book, shipping in late summer. It will be hardbound with high-quality paper and image quality. There will be well over 300 color plates. After the coffee table book, we anticipate another book in 2020 showing new cartoons that I will draw during the Trump re-election campaign.

We’re also celebrating our 10 year anniversary with a website upgrade at www.grrrgraphics.com. Now that we’ve packed it full of cartoons every day for the past 10 years, we’ve raised the site infrastructure to a higher, stronger level, thus making it easier to handle our catalog of viral cartoons. Despite all the cartoons on the site, we anticipate that it will load 70% faster. We will also be adding comments to the site to engage with all our fans and friends. Stay tooned, as we take political cartoons to the next level. 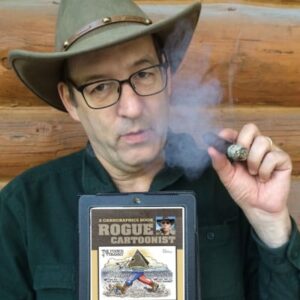 Ben Garrison
Ben Garrison is a contributing writer for NRN. He draws politically incorrect cartoons the Mainstream Media won’t run and has been frequently retweeted by President Trump. In May 2019, he celebrates the 10 year anniversary of GrrrGraphics.com.

Latest posts by Ben Garrison (see all)
Share to break through the censorship!